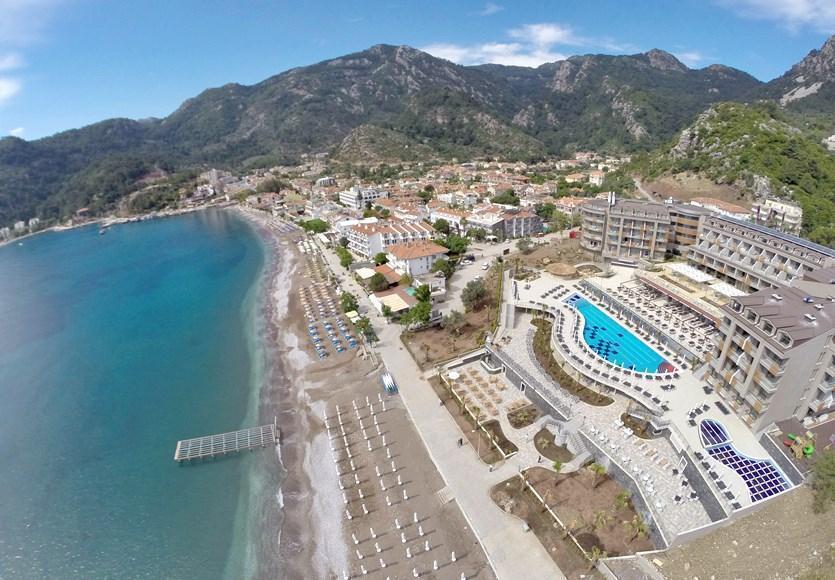 Turunç is a Turkish holiday resort situated in the Marmaris district of Muğla Province, Turkey.[1]

It is located 20 km (12 mi) south of Marmaris on the Mediterranean sea, surrounded by the Taurus Mountains. The area is a former fishing village, and has been populated since ancient times as the sea offers a variety of precious resources. Despite the region's fast development in recent years,[when?] the natural environment of Turunç has been preserved.[citation needed] As a resort, the village has won the Blue Flag award in recognition of its clean beach and water quality. The size of Turunç is about 1 km (0.62 mi), taking half an hour to walk from one side to the other. The waterfront features restaurants, bazaars and bars. However, due to the nature of the resort there are few exclusively adult establishments.

The climate is warm, and enables the tourist season to be 7 months a year from April to October.

Infrastructure
The closest airport is the Dalaman Airport. It is 120 km (75 mi) east of Turunç. The Adnan Menderes Airport of Izmir is 270 km (170 mi) north of the town.

The road to the town passes through the Taurus Mountains, and has very low speed limit. To reach Turunç from Marmaris is about 20 minutes drive.

Nearby cities include Icmeler and Marmaris.