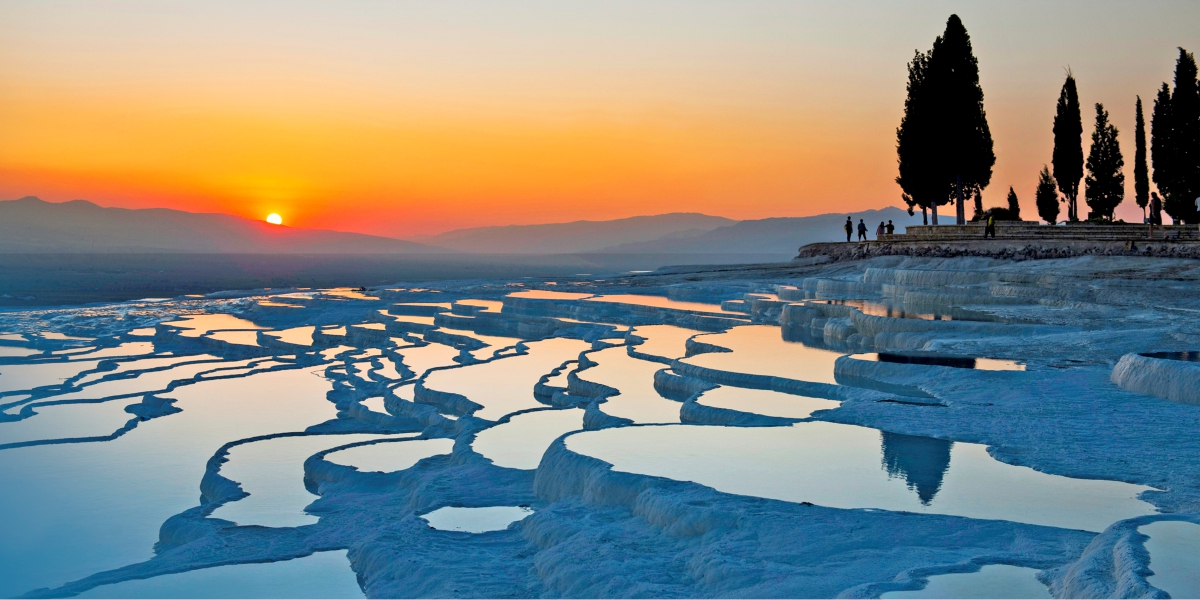 Pamukkale, meaning "cotton castle" in Turkish, is a natural site in Denizli in southwestern Turkey. The area is famous for a carbonate mineral left by the flowing water. It is located in Turkey's Inner Aegean region, in the River Menderes valley, which has a temperate climate for most of the year.

Known as Pamukkale (Cotton Castle) or ancient Hierapolis (Holy City), this area has been drawing the weary to its thermal springs since the time of Classical antiquity.[1] The Turkish name refers to the surface of the shimmering, snow-white limestone, shaped over millennia by calcium-rich springs. Dripping slowly down the vast mountainside, mineral-rich waters foam and collect in terraces, spilling over cascades of stalactites into milky pools below. Legend has it that the formations are solidified cotton (the area’s principal crop) that giants left out to dry.[citation needed]

Tourism is and has been a major industry in the area for thousands of years, due to the attraction of the thermal pools.[1] As recently as the mid-20th century, hotels were built over the ruins of Hierapolis, causing considerable damage.[citation needed] An approach road was built from the valley over the terraces, and motor bikes were allowed to go up and down the slopes. When the area was declared a World Heritage Site, the hotels were demolished and the road removed and replaced with artificial pools.[citation needed]

Overshadowed by natural wonder, Pamukkale’s well-preserved Roman ruins and museum have been remarkably underestimated and unadvertised; tourist brochures over the past 20 years have mainly featured photos of people bathing in the calcium pools. Aside from a small footpath running up the mountain face, the terraces are all currently off-limits, having suffered erosion and water pollution at the feet of tourists.

Geology
This section does not cite any sources. Please help improve this section by adding citations to reliable sources. Unsourced material may be challenged and removed. (June 2017) (Learn how and when to remove this template message)
Pamukkale's terraces are made of travertine, a sedimentary rock deposited by water from the hot springs.[1]

This section does not cite any sources. Please help improve this section by adding citations to reliable sources. Unsourced material may be challenged and removed. (July 2009) (Learn how and when to remove this template message)
Museum
In this museum, alongside historical artifacts from Hierapolis, there are also artifacts from Laodiceia, Colossae, Tripolis, Attuda and other towns of the Lycos (Çürüksu) valley. In addition to these, the museum has a large section devoted to artifacts found at Beycesultan Hüyük that includes some of the most beautiful examples of Bronze Age craft.

Artifacts from the Caria, Pisidia and Lydia regions are also on display in this museum. The museum’s exhibition space consists of three closed areas of the Hierapolis Bath and the open areas in the eastern side which are known to have been used as the library and gymnasium. The artifacts in open exhibition space are mostly marble and stone. Hierapolis is broken down into ruins.

The underground volcanic activity which causes the hot springs also forced carbon dioxide into a cave, which was called the Plutonium, which here means "place of the god Pluto". This cave was used for religious purposes by priests of Cybele, who found ways to appear immune to the suffocating gas.

Tadpoles can be found in the pools.

Protecting the thermal waters
The hotels built in the 1960s were demolished as they were draining the thermal waters into their swimming pools and caused damage to the terraces.[citation needed] The water supply to the hotels is restricted in an effort to preserve the overall site and to allow deposits to regenerate.